Many PCB designers get to a point where they need to put some artwork on a board they're designing. Some time ago I had to do just that and it appeared that there is no trivial solution in kicad.

In this post I'm going to show you how to make pretty logos in pcbnew.

Kicad offers a simple program called  bitmap2component which vectorizes any bitmap image and makes an eeschema or pcbnew module. We won't be dealing with eeschema here, since this isn't very interesting, but getting a pcbnew module is very useful. Unfortunately, the tool offers very little functionality and in most cases it won't be enough for most things (as of the version from 2012-oct-18).

The program's interface essentially looks like in the picture below and it's basic workflow is: load a file, export as component. Not really exciting. 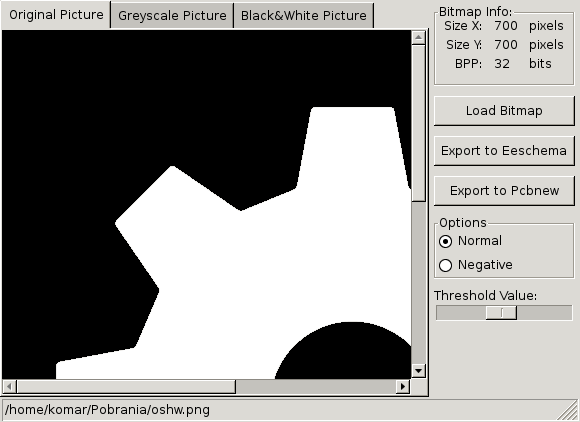 It requires that your artwork be white and the background black, but it has a negative option and a settable threshold value if you don't want to do much preprocessing.

After loading the generated file into pcbnew, you'll see that it's as basic as it can be. Just a shape on the silkscreen layer. The program assumes arbitrary input resolution of 300ppi, so a 300 by 300 image will give a 1" by 1" logo on the board.

Now this is the first problem I came across. If the artwork is complicated, the vectorizer will not give nice sharp edges. This is rather standard behavior of vectorizers - they always need high resolution bitmaps to deal with details, even if the resolution seems enough.

Here's an example of how the vectorization is done with the same image but different resolutions.

This is the input image in 2 different resolutions:

You can see that the scaled-down version of the image doesn't lack any shape details. Below are the results of conversion (scaled to the same size)

As you can see the lower-resolution image was converted to a shape with much more rounded and smooth corners and this is what you usually don't want.

So what I want to do is feed the vectorizer with much higher resolution image to make sure the output shape is correct and then scale the module down.

For this purpose I wrote a very simple script which preprocesses the module by scaling it by a constant factor and changing its name (as you can't do that in the current version of  bitmap2component either):

This scales the module by dividing both dimensions of every point by a number passed as parameter. It also sets a new module name (instead of "LOGO"). The usage is simple:

Since the module file generated by the vectorizer contains information about original image's dimensions, the script could actually be extended to take that into account and generate a module of any physical dimensions. But I won't do that, since I generate such components only on occasion.

Artwork on PCBs doesn't have to be limited to silkscreen. In fact it can be much better-looking without silkscreen at all. One idea is to uncover a part of the soldermask to reveal the copper underneath. Since the PCB fabs usually offer rather high soldermask resolution, sometimes better than that of silkscreen, the image "printed" this way can look very good, and it actually does in reality. It looks even better when the board is gold-plated, but this is becoming a standard these days.

In order to generate this kind of effect we need the module to have 2 layers. The soldermask expansion to reveal bare copper and the actual copper layer. Since PCB fabs can't avoid some offset between layers, making these 2 layers exactly the same isn't a good idea, since just a 0.1mm shift will probably look bad. So for a start we need a logo and it's larger (dilated) version. This can be easily prepared in any raster graphics program, like The Gimp.

For this article, let's take the Open Source Hardware logo. On the left is a preprocessed black and white logo. I used The Gimp's Dilate filter a couple of times to generate the larger soldermask expansion. When using this filter, it's important to work on a real black and white image, without nice anti-aliased edges. The soldermask expansion is shown on the right. Then I converted both graphics (remember to keep the image sizes the same) to modules using the vectorizer.

Now two things remain to be done. The layers have to be changed accordingly and the two modules have to be merged into one.

Some documentation concerning kicad's file formats is available on the internet, but to put it simple: we care only for one type of lines in this file - the ones which start from DP. These lines define polygons and contain layer information. The eighth field is the layer number. There may be some problems finding the numbers for particular layers on the Web, so my small empiric research showed that copper is 15 and soldermask is 23. I put together this little script to change layer numbers and join two modules together:

After that, you will most probably need to scale the generated module and set a sensible name with the previous script. The result is shown on the right. The solution generates the result for the top layer. For the bottom one it's enough to flip the module in pcbnew, but the actual polygons will not be flipped, so you'll need to flip them manually before converting to modules. An alternative option is to add this functionality to the script, of course.

Obviously there are a lot of enhancements to be done. The script could automatically generate a dilated version of the copper module, since the dilation algorithm is rather simple for polygons. Also silkscreen layer could be attached to the output module to form a single module with everything you need to have a pretty logo. But this you can quite as well do yourself;).

Here's an example how a connection of these two techniques looks in reality. This is a standard FR4 board with black matte soldermask and ENIG gold-plating: 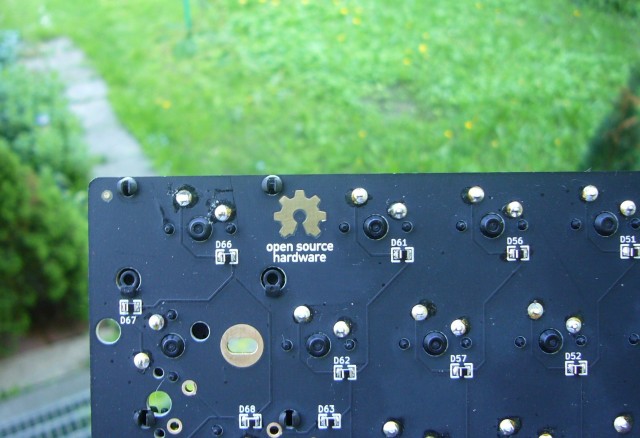 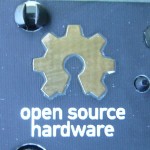 The closeup reveals some imperfections of the production process, though. You can see that the soldermask cutout is shifted a bit and its shape is simplified a lot compared to the project. Fortunately, it doesn't look that bad from a sensible distance.

And that's all. This is how you do artwork in pcbnew. I hope it was useful and informative in any way. If you have any new ideas or enhancements to propose, leave them in the comments section!

Here's a closeup of the same logo on the GH60 rev. B board with glossy white soldermask: 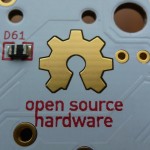